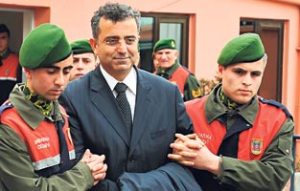 A large number of professional Web sites offering nationalist content and pseudo-scientific research about Armenian genocide allegations, Turkey’s Kurdish population and Greece and Turkey’s religious citizens that have been on the Internet for a long time have been found to be operated by Ergenekon, a clandestine terrorist organization charged with attempting to overthrow the government.
These Web sites, which are updated frequently in both Turkish and English, feature extremely nationalist propaganda against Greeks, Kurds and Armenians, as well as Turkey’s own Muslim segments. They have been around for some time, standing out with their professional-looking content and design; however, these sites, rich with information, videos, photographs and documents, have never offered any contact information. So who updates these sites that vehemently propagate official ideology on a number of issues and sometimes include information considered highly confidential? Last months raids in the Ergenekon investigation have now provided the answer to this question, thanks to IT expert Hüseyin Ataman Yıldırım, who was also detained as part of the investigation. Ataman, who was also the spokesperson for the Biz Kaç Kişiyiz (How Many of Us?) movement, is a former naval officer. He is also the owner of the İstanbul-based software company Naryaz.
Ataman is also the administrator of the Web site 4000ler.trnet.com, which has retired and on-duty military officers as members. One of the members is Adm. Feyyaz Ögütçü, who, according to a National Intelligence Organi-zation (MİT) document, was one of the founders of the Karargah Houses, which the Ergenekon investigation revealed were meeting spots for army generals plotting a coup d’etat as well as homes to hide hit men and ammunition.
The Ergenekon investigation recently revealed that 35 Internet domains with similar content and design were registered with the same company.
The sites seem to have been trying to foment public opinion in line with the goals of the Ergenekon organization.
The sites include
www.abdullahocalanakademisi.info,
www.apopkk.com,
www.armenianreality.com,
www.cameria.org,
www.gencizbiz.net,
www.genclik.info,
www.gnkur.net,
www.greekmurderers.net,
irtica.net, irtica.org, naksilik.com, nursi.info, pkkapo.com, pkkgercegi.com, terorveguvenlik.net, turkatak.com and turkeyturks.com.
http://www.todayszaman.com/tz-web/detaylar.do?load=detay&link=166027
Advertisement

The latest news on WordPress.com and the WordPress community.